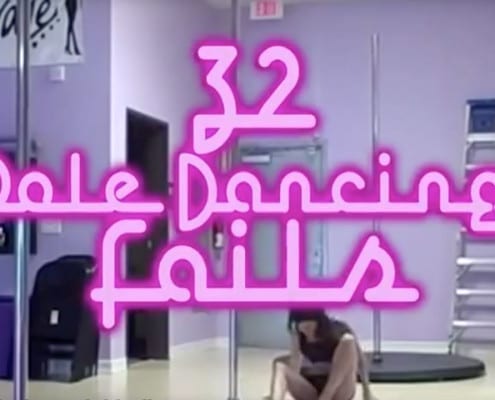 If you saw the 32 Pole Dancing Fails video that has went viral and circulated major sites such as the Huffington Post a few years back, then you may have seen that the All Star Stages Pink Delight Portable Dance Pole was one of the apparatus’ that made it on to the vid.

Now to be fair, there was nothing wrong w/ the All Star Stages unit, nor was it installed incorrectly. It was simply a slip from the young dancer who had taken to the stage in 2009 at the AVN Adult Film Convention at the Sands Expo in January.

Fyre TV was heading the event. There were two All Star Stages portable dance poles and stages on the main stage at the expo. Both All Star units housed 5×5 ft. octagon stages w/ 12.5 ft tall ceiling free dance poles. The poles were 50mm dance sizes.

The young lady was upside down on the pole at the 1:30 minute mark of the video.

Within a couple of seconds she happened to not only tumble over having lost her “footing” but continued off of the All Star Stage right onto the sound and lighting guys just off to the left.

Fortunately for both the dancer and the sound / lighting guy, everyone was okay. Nor was any of the equipment damaged during the show.

Also if you notice it is the only video that sports the All Star Stages logo (the older version of the logo) right as she tumbles off.

We were aware of the mishap in 2009 and it was interesting to see 5 yrs later the All Star Stages dance pole made a cameo appearance in the 32 Pole Dance Fails viral video.

Fast Forward to 1:30 minute mark to see the fail.

All Star Stages™ 2018What to Do B4 and After Pole Dancing Class?
Scroll to top